For the entire month of July thus far, we have been sweating through a heat wave. Niko's feeling the humidity and high temps because he is extra sluggish and borderline depressed. He plops down in front of the fan. He lays in what Ed calls "dead deer" position very often. We give him an ice cube once in a while to lick, chew, and ultimately to cool off.


To help us all deal with this heat, I offer this piece of advice: think back to cooler days and place yourself in that picture. Feel the cold and crisp winter air. It's the power of mind over body. For Niko, imagine the cold snow under your paws, buddy.

Email ThisBlogThis!Share to TwitterShare to FacebookShare to Pinterest
Labels: heatwave

This Little Piggy Went to a Roast

Ed's brother and wife threw a pig roast party last weekend. We helped, attended, and enjoyed it. Niko was a guest as well. He wouldn't have missed it for the world (Uncle Rob had promised him some pig knuckles prior to that day).  We slept outside in a tent the night before. The day started at 4am when the guys got up to prepare the 100 lb pig.  I kept Niko in the tent and we snoozed until sunrise.  As soon as the sun broke, Niko was up and I let him out of the tent. I continued to snooze and was awaken by the sound of Niko being put back into the tent. He was being punished for getting caught with a baby chickadee in his mouth and violently shaking it. Ed caught him in time and set the bird free (it survived).  I wasn't around to see this, but Ed said the bird sounded just like his squeaky toys.
Later that morning, Niko also chased the host's cat up a pine tree. Niko was definitely mischievous that morning. The cat also survived Niko.
Niko was kept off leash the whole day. I gave him breaks from the outside by letting him in the house to cool off. There were times he even approached the door voluntarily. When the pig was ready, Niko was given an ear to chow down on: 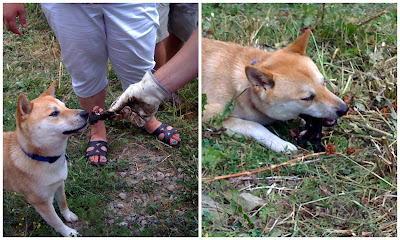 He lingered by the table where they cut the cooked meat. He picked up scraps that dropped to the ground. There were children at the party who were drawn to Niko as well. One kid spent 30 mins trying to loop a glow stick necklace around Niko and succeeded. It was helpful to spot him out in the dark since he was on the loose.
It was a fantastic day and Niko is still exhausted from all the excitement and yummy piggy goodness.
Posted by Melissa at 11:52 PM 4 comments:

Email ThisBlogThis!Share to TwitterShare to FacebookShare to Pinterest
Labels: pigroast

In the dog days of summer, Niko slows down  his usual active self quite a bit. He makes every effort to find shade when he's outside. He has some common sense. On this very sunny and hot day, he found shade under our Japanese Maple Tree, which I never see him do. Japanese dog, under a Japanese tree. 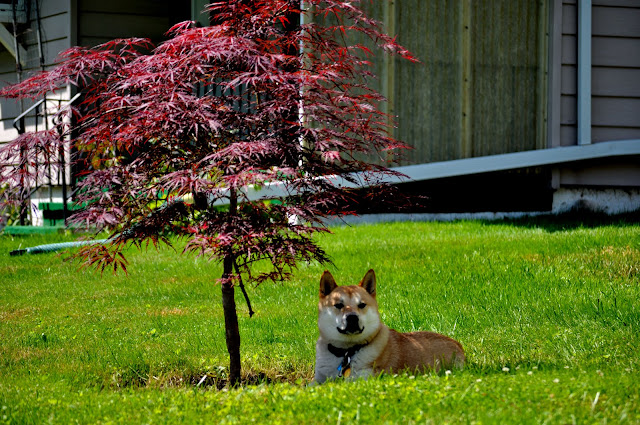 Keep in mind shibas wear a fur coat all year round and they feel the heat much more than tank top and shorts wearing humans.  Make sure your dog has shelter and water.
Posted by Melissa at 11:11 PM 2 comments: